Our new Chairman for the Africa Forum

Major General Umar Usman of Chartered Institute of Logistics and Transport (CILT) Nigeria has been announced as the new Chairman of the Africa Forum to serve for the next two years. In this time he will look to grow the membership and education through new branches and build stronger relationships with governments and corporates.

General Usman will take over the leadership of the Africa Forum and drive the regional programme over the next two years. In this time he will look to grow the membership and education through new branches and build stronger relationships with governments and corporates. He will also look to develop the regional model further.

Speaking of his appointment General Usman said: “I am truly honoured by my election as International Vice President and Chairman Africa Forum. I must thank the International President, Paul Brooks and the International Secretary General, Keith Newton for the confidence they have in my abilities to assume this mantle of leadership in the service of CILT.

“I am aware of the fact that CILT International has done a great deal to advance growth in the African Region and my predecessors have equally done their best in steering the affairs of the Institute on the Continent.

I will strive hard to build on the achievements made and also consolidate on those key important areas that will propel CILT in Africa to the next level. In this regard, I will be counting on the support, guidance and goodwill of CILT International and all other Territorial Governing Bodies and Branches for the continuous progress and development of CILT in Africa and the world at large.

General Usman’s main objectives whilst in office are:

He also announced the appointment of George Makuke to the new role of Chairman Elect of the Africa Forum, where he will take over as Chairman after Major General Usman’s two year period.  He will now support General Usman in the East and South Africa areas where there is a great need for support in regenerating Kenya and growth agendas in other countries. He will also be able to focus on the Tanzanian growth agenda where government and corporate partnership will be key areas to work on.

Dr Olupot, Past Chairman, Africa Forum said: “Thank you for your support in my time as the Chair of the Africa Forum. I have been privileged to serve as the Chair and wish General Usman and George all the best for the next few years.”

Contemporary Issues in Logistics and Transport in the 21st Century discussed at Africa Forum 2015. 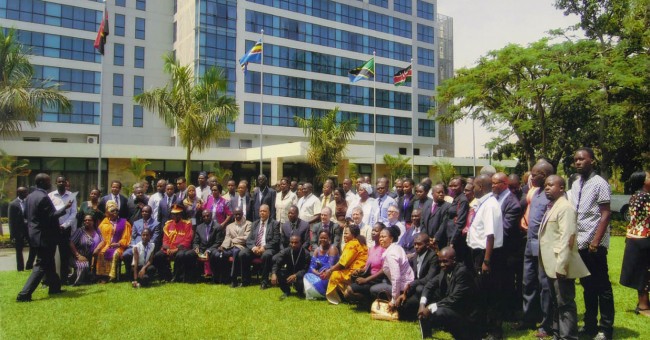 Home • News • Our new Chairman for the Africa Forum