In the 1980s, the Australian government laid down the first framework for the creation of High Productivity Vehicles (HPVs). At CILT International Convention this June in Wroclaw, renowned transport expert Professor Kim Hassall gave a thorough overview of these remarkable vehicles, and asked delegates to consider the potential of High Productivity Vehicles in their own regions.

‘I’m going to through two long term experiments that have come out of Australia and caught on to a certain extent around the rest world. One is a thirty year experiment, that could be considered finished by now, and the other one is a twenty year experiment that is I think still in its infancy.’

The first experiment Dr Hassall discusses is the evolution in Australia of the B-double. ‘We in Australia ripped off the concept of the Canadian A-train, and we created a B-train which has a different coupling.’  The B-double, also known as a B-train, consists of a truck pulling two trailers, for a total of up to 9 axles and 68 tonnes of capacity with certain mass management accreditations. ‘Up until (the introduction of HPVs), the workhorse of the Australian medium and long-distance fleet was the six axle articulated semi-trailer, and there are lots of those around Europe. However over a period of 20 years or so, the most popular vehicle has become the 9 axle B-double.’ 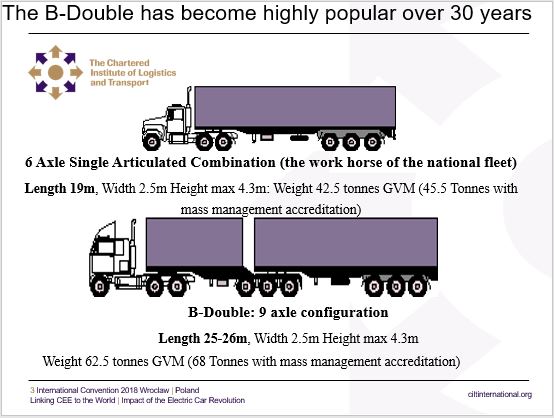 One concern surrounding the development of the B-double was over safety, but according to Dr Hassall, these larger vehicles are actually safer than their six axle counterparts. ‘Bigger must be bad – not necessarily true. (B-doubles account for) 43% of the freight task but only 28% of the major crashes.’ This compares very favourably with the semi-trailers, which carry 16% of road freight but contribute to 35% of major truck crashes.

Dr Hassall also points to a promising correlation in his research between the rise of HPVs and a fall in fatal road accidents. HPVs have seen strong growth in Australia, with Dr Hassall approximating their number at over 21,000 in 2017, and their progress has been carefully monitored. ‘We’ve got about 49 variables in a big black box. One of the things popping out of that research is that as the strong growth of B-doubles has emerged in Australia…the number of fatal road accidents involving heavy vehicles has actually gone down.’

Another key point for Dr Hassall is that HPVs bring environmental benefits. ‘On one of our major trips in Australia from Sydney to Brisbane…if you look at the environmental impact of two B-doubles doing this task as opposed to some eleven small trucks, there’s enormous impact with regard to NOx, COx, particulate matter and CO2. Not only from a safety perspective but from an environmental perspective, the growth rate in B-doubles has been a real winner.’ 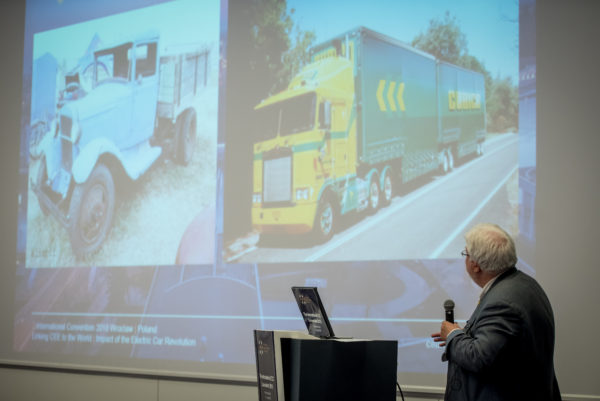 Dr Hassall then moved on the second experiment, Australia’s introduction of the Performance Based Standards framework. ‘The B-double story really goes from the mid-eighties to the current period of time…20 years ago, from 1998 up until 2006 we had two separate regulatory authorities looking at the productivity of road freight. This is common to lots of countries, road freight isn’t going away to soon. We can see innovative rail shuttles, more efficient long-distance, regional, and long corridor rail, but we’re going to be stuck with the road task for some time…The next step in trucking productivity is the development of…Performance Based Standards…It is a set of engineering standards. What differentiates these vehicles from your conventional vehicle is their performance on the road, from an infrastructure point of view, from a swerve and yaw capability, to their potential power, their acceleration capability, a whole raft of engineering features. If they perform against these (standards), there a certain access regimes, certain load benefits they can get, and that delivers productivity.’

The Performance Based Standards framework, in operation since 2007, has also spurred the creation of a far greater array of vehicles. ‘When we focused on the B-double, we had B-doubles that had seven, eight or nine axles. (Under PBS) a whole range of trucks emerged.’ Dr Hassall indicates a slide, ‘This is a seven axle twin-steer with a crane on-board. These have been incredibly useful not only taking telegraphs poles around, but in some of the gas industries that involve longer pipelines. These saved tens of thousands of trips when we put in a gas plant in central Queensland.’ 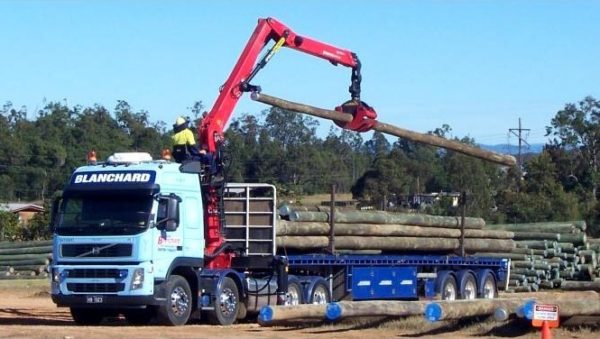 Perhaps surprisingly, half of all PBS based vehicles aren’t operating in remote locations or on rural roads. ‘Fifty percent of HPVs operating in Australia…are operating in urban and peri-urban environments, and the big winners are things like the road authorities, the construction industry, the mining industry, the quarry industry and…the grain industry.’

In Dr Hassall’s mind, the great problem with HPVs is not the reality but the perception, and this is changing as experts produce more data. ‘This (research has) really opened the eyes of some of the politicians…Access is still a problem, and people view three trailers as bad, two trailers as good…but they are saying no to greater productivity and safety gains by being conservative. What the analysis has showed is that bigger is not bad, it is in fact very productive and a lot safer. Bigger is not bad, bigger is better.’

Dr Kim Hassall is an international freight consultant, whose career began as an applied mathematician, before moving into transport with the Bureau of Transport Economics in Canberra in 1987. He then progressed to being National Manager of Transport Economics, Transport Operations, and Transport Strategy for Australia Post Headquarters in Melbourne, stepping down in 2005.

He is a Director of the Industrial Logistics Institute, Chair of Education and Professional Development for CILT Australia, and Chair of the National Truck Accident Research Centre in Australia. Kim became a Principal Fellow with the University of Melbourne in 2002, from where he has also published over 100 papers, articles and submissions in his specialized fields of freight and logistics efficiency and productivity. He is also involved in research projects for the UN and the OECD.

CILT International Convention ran this year from the 3rd to the 6th of June under the twin themes of Linking CEE to the World and The Electric Car Revolution and its Impact on Logistics. Delegates enjoyed an exciting 4-day programme, including presentations by Professor David Cebon of the Centre for Sustainable Road Freight, WiLAT Global Advisor Dr Dorothy Chan, Professor René de Koster of the Rotterdam School of Management, and Chris Jones, Vice-President and Chief Analyst at Canalys.

You can catch up on this and other presentations via our Facebook videos page. The PowerPoint presentations from International Convention are also available on our SlideShare page.

Next year we will be in Manchester for International Convention 2019. Organised under the theme of Global Solutions to Global Challenges, Industry 4.0, Future Leaders (YPs), and Women in Logistics and Transport (WiLAT) will be at the heart of International Convention 2019. Join us there to celebrate our centenary, and help shape the next 100 years of our Institute and our industry.

Next Story
News
Logistics for the Low Carbon Age 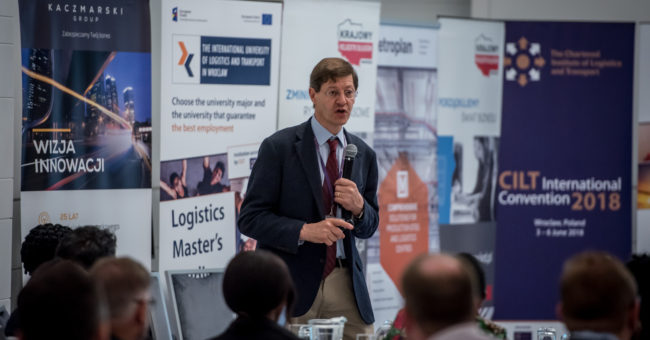